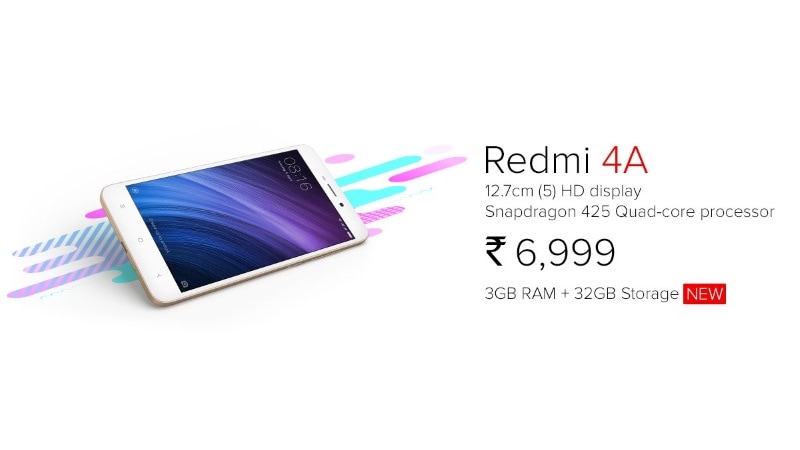 Xiaomi on Tuesday launched a new variant of its Redmi 4A smartphone in India, with additional RAM and storage compared to the original handset. The Redmi 4A variant with 3GB RAM and 32GB built-in storage will be made available at a price of Rs. 6,999 by the company from Mi.com, Flipkart, Amazon India, Paytm, and Tata CliQ starting Thursday.

Manu Kumar Jain, vice president at Xiaomi and managing director at Xiaomi India, said in a tweet on Monday, "Surprise! We are launching a new variant of Redmi 4A (3GB RAM + 32 GB flash memory) at an amazing price of Rs. 6,999."

To recall, the Xiaomi Redmi 4A was launched in India in March at Rs. 5,999, following its launch in China in November, in a 2GB RAM and 16GB storage variant. Featuring a polycarbonate body, the Redmi 4A bears a hybrid dual-SIM card slot, and runs MIUI 8 based on Android 6.0 Marshmallow. The smartphone features a 5-inch HD (720x1280 pixels) display, and is powered by a 1.4GHz quad-core Snapdragon 425 SoC coupled with the Adreno 308 GPU.

The Redmi 4A's connectivity options include 4G VoLTE, Wi-Fi 802.11 b/g/n, GPS/ A-GPS, and Bluetooth v4.1. Sensors on board the smartphone include accelerometer, ambient light, gyroscope, infrared, and proximity. Dimensions of the new Xiaomi smartphone are 139.5x70.4x8.5mm, and it weighs in at 131.5 grams. Redmi 4A is powered by a 3120mAh battery with fast charging support.

Related & Handpicked articles you may be interested in, check them out